Life, the Universe, and Everything – talking doors

For my 42nd birthday, i had a Life, the Universe, and Everything party My first and most ambitious idea was to make the doors of my house talk. After months of planning and a couple of false starts, it finally happened two weeks after the party. Here is what i learnt, geek-friends:

I failed at soldering. (the course was called “Electrical engineering 101”, and i didn’t pass very much of it, but i was especially bad at the soldering). So my friend Julian Sortland helped me with the components. Here’s what he built: An mp3 trigger (WIG-09715) (you should download the latest firmware with random track triggering) 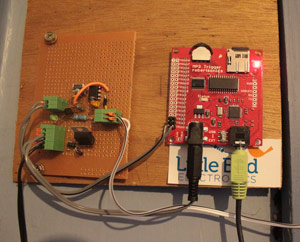 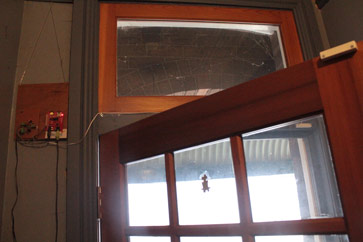 And, because i couldn’t find them on the internet anywhere, here are a selection of talking door clips from the BBC radio and TV shows and the movie:

You know what my real surprise was? For me, the archetypical door utterance was “You’ve made a simple door very happy”. I hear it in my head, in the voice from the TV series. but it’s only in the book. none of the doors in the radio plays, the TV shows, or even the movie ever say that.

Life, the Universe, and Everything – my 42nd birthday party

Life, the Universe, and Everything party

– with as many ingredients as possible from all the versions of the Hitchhiker’s Guide To The Galaxy and everything else Douglas Adams ever did or said. For a little while i called the party “Andrew is the answer to the ultimate question of life the universe and everything”. But that seemed a bit ostentatious, so i changed it to “Andrew, he’s just this guy, you know?” Here are some of my ideas, with a few words about i made them happen (or failed to):

My first and most important idea. There’s a whole page about what I did and didn’t do here: Talking doors – how I made my doors talk just like the Heart of Gold

I wanted each room to feature a different version of the story (with the books available on every surface, beside every bottle). So i bought and borrowed as many copies of the books as i could, and at least one each of the following which i played on televisions and computers throughout the house:

I don’t think anybody actually did it (because i have high-quality friends who know to give a present when they have a good one and not feel guilty if they don’t have an idea), but i asked anybody who did feel guilty about wanting to give me something to give it to Douglas’ favourite charity, Save the Rhino

Thanks to Julian, Kate, Nicole, Fraser, Josh, and Cathy for lots of help and good ideas. And to everybody who themed up, even if that just meant carrying a towel.

these office events are as much divisive as uniting. you find you have little in common with people you have a good working relationship with. but you also discover [are given 😉 ] new alliances. a small group of us found a different trajectory through the weekend, in the city as well as the clubs. that saturday evening was an object lesson in belonging. i was ill at ease, as always, in the bar full of people getting drunk, and dancing to cheesy music. i watched the football to avoid socialising. i wondered why i felt threatened and antagonised by the pleasures of my friends. i was glad just to get out of there. minutes later, walking down the stairs of the old theatre towards the smoke and boom of the dancefloor, i was intensely happy and relaxed. i have the roadmap for these places in my head. “this is my church. this is where i heal my hurts.” and the people who think me constrained, prim even, because i won’t get drunk with them, never see the four hours of madness on the dancefloor.