i bought a painting

it's the most expensive thing i own that isn't a house. here is what it looks like: 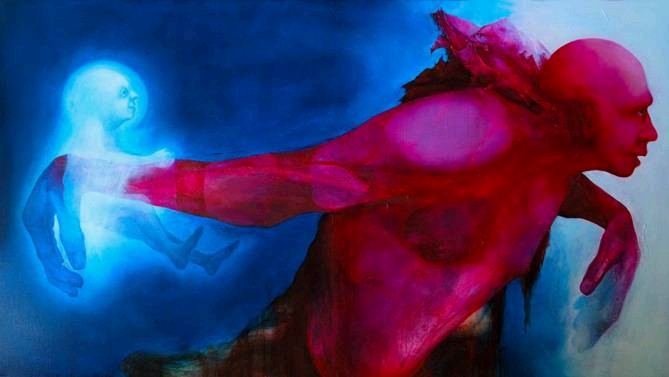 And here are some of my reasons, clipped from three emails:

i'd much rather buy music than beer,
paintings than renovations
theatre than films

it's a good question though, why
maybe the only true answer is, i had the money in the bank, and noone else was buying the painting - if someone was quicker to the red dot, it would be theirs.

when john paints, he spends weeks preparing the canvases, he uses the most long-lasting oils, he finishes everything properly. he wants all his work to look just as good 200 years from now. that's part of his religious thing - he hates the disposable nature of our times. and i really respect that. i get paid so much money to do things which are so ethereal, which are only made of ideas and pieces of electricity, which disappear so quickly and are worth nothing the moment they're gone. i don't know anyone who's ever spent that much money on a painting - but my friends are always spending thousands of dollars on televisions, computers, cars, boats, kitchens, clothes. and all that stuff is so temporary, so soul-destroying for the factory workers who make them, so destructive to the environment in the manufacturing and the junk it becomes.

it's a lot of money for a painting, but hardly anything for a car. why do so many people want to own cars?


i don't think i know anyone who's ever spent more than a thousand bucks on a picture either.

i really love john though, and he is incredibly dedicated to a really good thing (old-school oil painting) which is not valued at all in our society. i reckon fifteen grand for that much of his time is already cheap.
and i've never bought anything from him at full price - he gave us the beetle drawings as a wedding present, the other two paintings he sold us cheap cos he was desperate for cash (he says that red face in our lougeroom is the best thing he's ever done, and he sold it to cathy for $1000), the two landscapes he gave us in return for helping with the framing and delivery and stuff, leonie's rugs we bought for half price because she thought there might have been something wrong with the wool (there wasn't)... not to mention all the beautiful objects and gifts he's given us, which are all over our house (just about anything with a red heart on it comes from john). i just felt like it was about time i paid him properly for something.

and it's only the mortgage i'm spending.
this year my super fund made 10K, my investment account thingy made 7K, and the painting isn't actual money i have to earn, it just means the mortgage will take one more year to pay off. john doesn't have any of that stuff. all he has is the possibility that his art will be valued into the future. hopefully when he's too old and blind to paint people will be paying 100K for these works, and he won't be living in a boarding house.

i saw a friend last night. he's just bought that new macintosh. over $5000 by the time he got the 4G of ram and the second hard drive and the licences for OSX and Vista. five years from now it'll be out on the footpath. if he bought a computer for $1000 and a painting for $4000, he'd still be enjoying the painting in twenty years...

i'm so glad i like computers and paintings not cars. imagine spending $15K on a car, then another 2 to keep it running every year, and five years from now you have to sell it and get another one!!

andrew, august 07.
thanks to mark brand for asking.

--> Here's a more general reason why i like artists

--> and some of my own very old visual arts